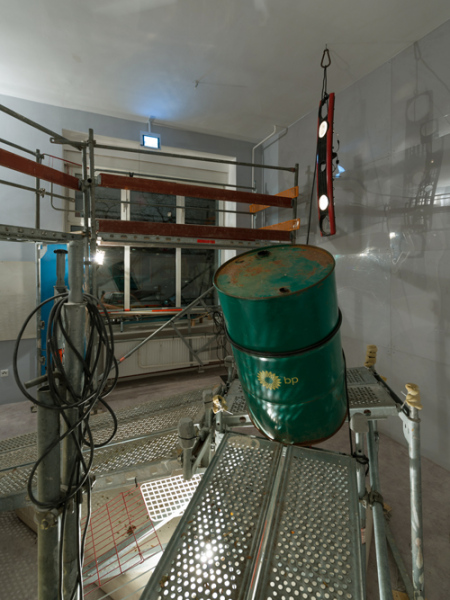 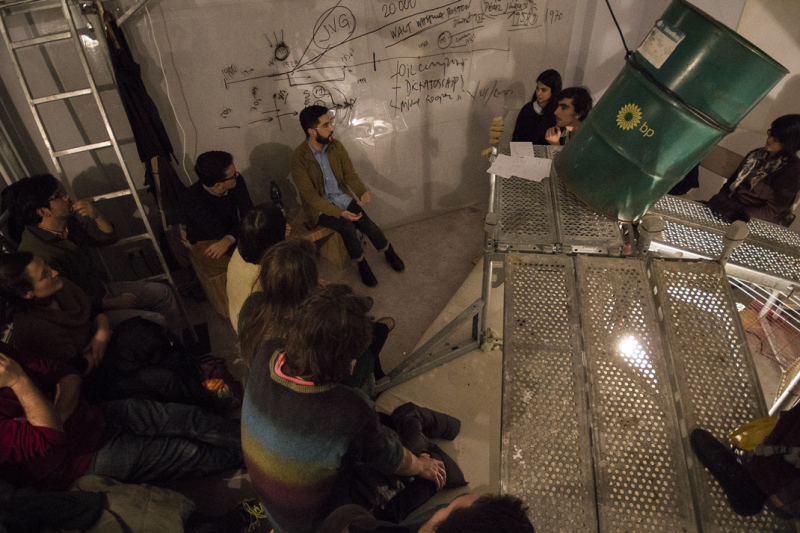 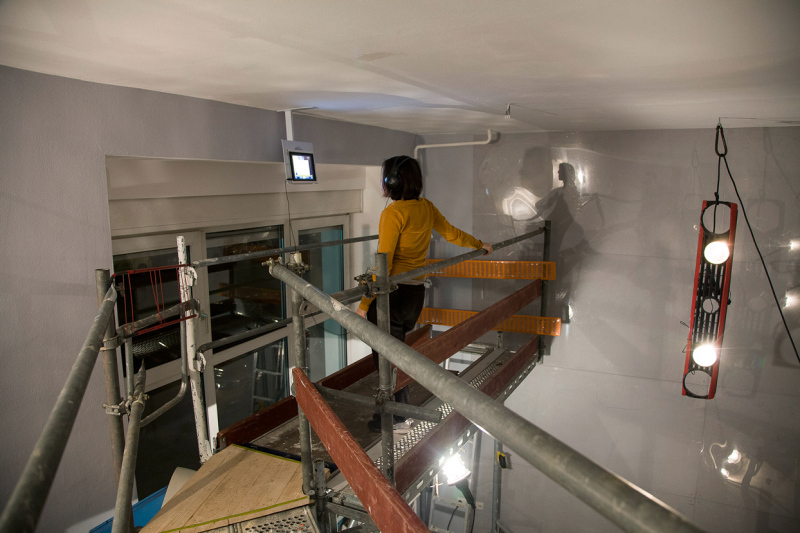 Alenso explores  conceptual and aesthetic  potentials of the discourse  of political economy and  some of its most  contemporary issues. The installation Tropical Curse portrays the fragility of current financial system, with a focus on Venezuela’s dependence on oil, its relationship with authoritarian regimes and the history of the oil industry and the current cultural and economic discomfort.

The installation Tropical Curse consists mainly of a scaffold platform, pieces of aluminum, and other found objects; such as a barrel of oil, a car bumper, tires, and gardening tools, among others. The sculptural place created from the assembly of different audiovisual elements and mediums entice the audience to go about, contemplate and discover the different objects and situations which coexist there.

The installation works with immaterial elements as well: the fetid smell from the oil barrel which floods the room and reminds us of a place where scarcity and a sensation to be in danger prevails, where the risk to fall wants is strikingly present. Second: the sound of a broker at the Chicago Stock Exchange, which claims for attention from the bottom of the barrel suggesting the characteristic violence present in most of the oil producing countries.

Tropical curse wants to be a capsule, to experiment and think about oil.

The space is illuminated like an oil refinery and totally covered by plastic sheets which were later intervened and used as whiteboards in the talk The Goose That Laid the Golden Eggs: Instability and Mirage in Venezuelan Oil Culture / A conversation with Ana Alenso, Ivan Capriles and Manuel Silva-Ferrer, about the developmental history of the oil industry and its influence on the architectural, political and cultural development of Venezuela. Documentaries and literature samples were also shown during the talk.

A second event was the screening of the film The Wages of Fear (1953). On this occasion, the installation is absorbed by the atmosphere of tension created by the film. The scaffolding became a road and the low lights that were hanging from the bumper suggested the danger of an explosion. During and after the projection, there was a discussion with Alenso and Manuel Silva Ferrer about the film and their relationship with the installation.

* The Wages of Fear (French: Le salaire de la peur) is a 1953 French-Italian drama film directed by Henri-Georges Clouzot, starring Yves Montand, and based on the 1950 French novel Le salaire de la peur (lit. “The Salary of Fear”) by Georges Arnaud. When a Mexican oil well owned by an American company catches fire, the company hires four European men, down on their luck, to drive two trucks over mountain dirt roads, loaded with nitroglycerine needed to extinguish the flames.

* Ivan Capriles is a Research Fellow on International Rule of Law at the Robert Bosch Academy in Berlin. He is in the final stages of a PhD in political science at the Berlin Graduate School of Social Sciences HU researching autonomy, control and power relations between national oil companies and their owning states.