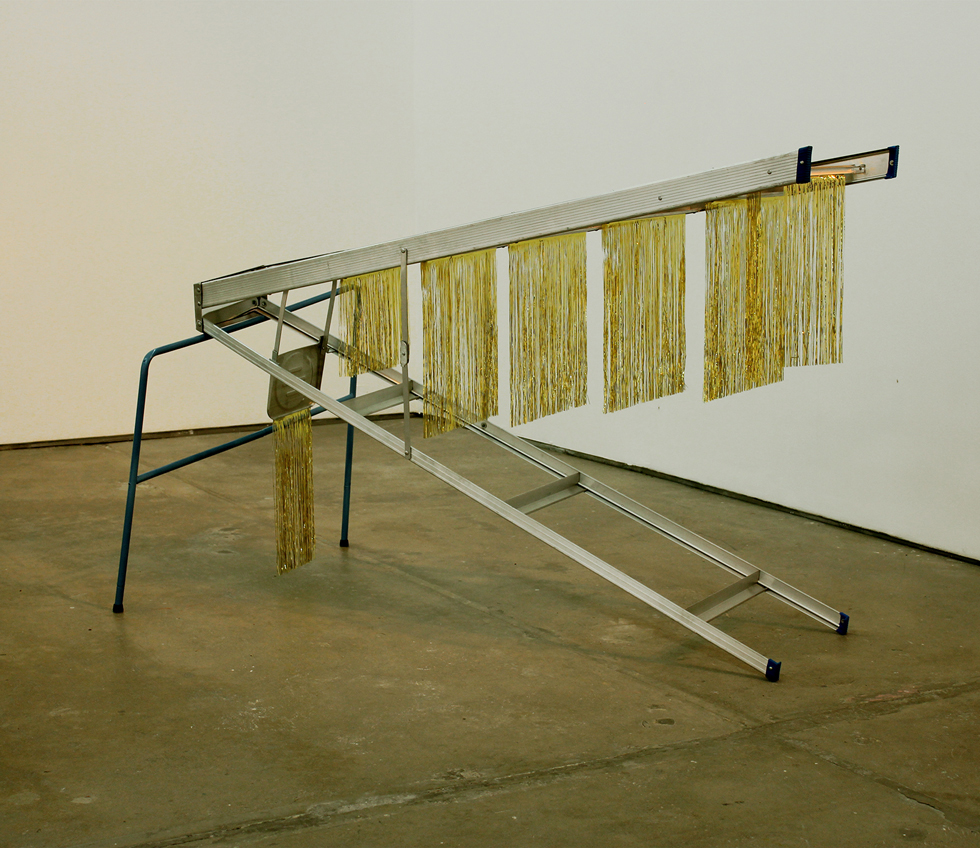 Please click on image to see for technical specifications

Gold too falls into sunset. In procession, wandering countries reminisce on better times while the imitation speaks more eloquently about the present, starry with a vaguely opulent spark, processed to ornate. The horizon's centre disintegrates into false reflections, out of its orbit. Ana Alenso defies gravity and toys with the object's tensions, with their industrial manufacture that tells the strategies of the swaying, the opaque trajectory of the debacle.

Placed horizontally, like a dissection table, the ladder of "Índice Bursátil" (Spanish for Stock Index) descends along the rhythm of the economic crises, the ups and downs of contemporary society. From afar, shiny sequins surround the ladder with the promise of progress and say, come closer, the history is over.

French philosopher Jacques Rancière stops before the fall, for we haven't yet witnessed the end of the grand narrative of modernity. Accustomed as they are to assessing the cracks, the jumps in the heartbeat of civilization, they who denounce these last gasps are wrong, he states. The powers, the struggles and the beliefs haven't vanished to the rhythm of a "general skepticism". Other magnetic forces are in play, orbiting around the dominating system that fights to impose its inevitablility . In the attraction of the "Bermuda Triangle" ships and planes get lost in the mirror, captivated by its siren's song, with its provocative equilibrium. Around it, the unwary and the thrill seekers look for other worlds, resisting hegemony.

The configuration of these alternative worlds is constructed from the poetic of the objects. They denounce the manifest reality, in a present that expands, in the words of the Colombian scholar Jaime Cerón, in order to rescue memory. In "Generic Alchemy in the XXI Century", a substitute for gold transfers out of focus beneath the disappearance of reality. It's a cadence that leaps into the void, hit by hit, in a dance of traffic.

Alenso’s objects hold in the twinkling of their manufacture their origins as hydrocarbon. In the paradoxical dynamics of misery, the abundance of our century holds the key to indigence. A volatile world is revealed, one of forged radiance.

Alenso intends to rescue the beauty of the fragile, evident reality in a world in which poverty gains ground in the cities. The Disease muddies the waters and rusts the material of its infrastructure. "Enfermedad Holandesa Tropical" (Tropical Dutch Disease) alludes to the tragedy of the countries that have only one natural resource for export. When the prices of the commodity rise, the earnings distort the local economy and accentuate the dependency. The beaten rake seems to remember the ubiquitous sentence "we have plowed the sea", from Simón Bolívar, one of the founders of America.

Two hundred years later, "24/7" spins around in circles, subjugated by the mirror. The device shows its mechanism without mystery, with the harsh weariness of a worker who's exhausted. These production routines build complex stalls: "Dong Xuang Center", the name of a Chinese market in Berlin, recovers the aesthetics of the trinket in order to devise an encounter with the other, spied upon by a wooden sentinel and golden garlands.

As those guards, the gallons of "El Pan de Cada Día" (The Bread of Each Day) stand in tired formation. The color has faded, as in a return to earth. They keep a civilization that insists on invoking the shine, stained by the routine of production. In "Vanidades" (Vanities), old lamps, once vital, look more like the carelessly placed boxes and the disorder that surrounds them.

Within this uncertainty, an occurrence: life.

The economy described by Alenso tells its story in the rise and fall of waste. It refutes the promises of the streamlined, finishing with the confidence of rust, in a strategy of survival that, among the detritus, still places hope in beauty.